Writing Rules! Advice From The Times on Writing Well 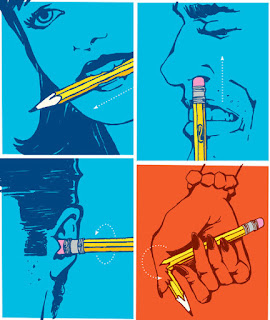 Rule 1: Listen to the Voice Inside Your Head

In a post for Draft, Verilyn Klinkenborg notes that he is often asked what his “writing process” is. “My answer is simple: I think patiently, trying out sentences in my head,” he writes.

He advises student writers to do the same, in contrast to school-writing, in which students are “asked repeatedly to write papers that are inherently insincere exercises in rearranging things they’ve read or been told.” (Or, we have to add, are school exercises masquerading as sincere personal essays, such as the one spoofed in this Onion classic.)

Mr. Klinkenborg advises, “Before you learn to write well, to trust yourself as a writer, you will have to learn to be patient in the presence of your own thoughts.”

You almost surely have a voice inside your head. At present, it’s an untrained voice. It natters along quite happily, constructing delayed ripostes and hypothetical conversations. Why not give it something useful to do? Memorize some poetry or prose, nothing too arcane. A rhythmic kind of writing works best, something that sounds almost spoken. Then play those passages over and over again in your memory.

Try Mr. Klinkenborg’s suggestions and see what happens. And if you’d like to record the voice in your head, or some of the sentences you begin to experiment with, try keeping a journal. The Personal Tech section of The Times reports this week that you can now do that via phone apps, without the “inconvenience of paper.”

Rule 2: Learn From the Masters

A classic Times series, “Writers on Writing,” asked contemporary writers from André Aciman to Hilma Wolitzer to talk about their work.

Glean insight from authors like Jamaica Kinkaid on why she writes; Allegra Goodman on calming the inner critic; and Carl Hiaasen on scrounging for material in newspaper headlines.

What are your favorite bits of advice? Copy them out for future inspiration.

To learn “How to Write Great,” immerse yourself in great literature, which, according to writer Roger Rosenblatt, can be anything from “Harold and the Purple Crayon” (“the lessons of the ‘Odyssey,’ minus the sex”) to “The Great Gatsby” (“Jay Gatsby, who stood straight and sober in the drunken Twenties, and who, nutty as his yearnings may have been, really was great”).

What books do you admire most? Why? As Mr. Rosenblatt does in this essay, you might try writing a paragraph describing what you find important and enduring about a book or author, whether your choice is an official classic on everyone’s list or an overlooked gem you think others should read.

In his hilarious “How To Write,” Colson Whitehead plays with shopworn advice that will be familiar to many student-writers. For instance:

Rule No. 1: Show and Tell. Most people say, “Show, don’t tell,” but I stand by Show and Tell, because when writers put their work out into the world, they’re like kids bringing their broken unicorns and chewed-up teddy bears into class in the sad hope that someone else will love them as much as they do. “And what do you have for us today, Marcy?” “A penetrating psychological study of a young med student who receives disturbing news from a former lover.” “How marvelous! Timmy, what are you holding there?” “It’s a Calvinoesque romp through an unnamed metropolis much like New York, narrated by an armadillo.” “Such imagination!” Show and Tell, followed by a good nap.

Before you read the rest of Mr. Whitehead’s rules, you might brainstorm, alone or in a group, your own “Rules for Writing” — derived from what you’ve learned in school, from “real” writers, from your own experience, or from anywhere else. When you’re finished, consider:

Is there a difference between the rules you’ve learned in school and those you’ve learned about writing on your own?
Which rules seem most sound to you?
Do we need rules for writing?
Then, read the rest of Mr. Whitehead’s essay, and compare the two lists. What did you learn about writing from his piece that you didn’t know before?

Or, use his list as a model, and create a list of rules that spoof the advice on, or the clichés about, a topic you know well.

In college, I used to underline sentences that struck me, that made me look up from the page. They were not necessarily the same sentences the professors pointed out, which would turn up for further explication on an exam. I noted them for their clarity, their rhythm, their beauty and their enchantment. For surely it is a magical thing for a handful of words, artfully arranged, to stop time. To conjure a place, a person, a situation, in all its specificity and dimensions. To affect us and alter us, as profoundly as real people and things do.

Sentences matter. In fact, Constance Hale notes that sentences can even act as miniature narratives. As Hale does, you might collect your own examples of great sentences that are mini-narratives.

Ms. Hale also explores the “Sentences of the Masters” to demonstrate the different effects of short and long sentences:

Gabriel García Márquez writes unhurried sentences that almost defy parsing. William Faulkner wrote a nearly 1,300-word sentence that ended up in Guinness World Records, but he used the five words “My mother is a fish” as a complete chapter of a book. Joan Didion can stop us short with simple truths, and she can take us on strolls down labyrinthine corridors.

Look for examples of interesting sentence structure and sentence variety in a work you are studying or reading, then write your own “copy-change” versions, in which you borrow another author’s structure and use it to create your own piece.

You might also consider excerpts from children’s book to review sound literary devices and explore the music that sentences make.

Delve into Strunk and White’s fourth style reminder “Write with nouns and verbs” by reading about what Helen Sword calls “Zombie Nouns”:

Nouns formed from other parts of speech are called nominalizations. Academics love them; so do lawyers, bureaucrats and business writers. I call them “zombie nouns” because they cannibalize active verbs, suck the lifeblood from adjectives and substitute abstract entities for human beings.

And to consider tricky questions like “Do verbs have to be in the active voice?” and “When is the passive voice useful?” use the rules and examples in this post by Constance Hale.

In a post on exclamation points, Ben Yagoda writes

Habitual e-mailers, texters and posters convey quite precise nuances through punctuation, which is after all one of the points of punctuation. A friend’s 12-year-old daughter once said that in her view, a single exclamation point is fine, as is three, but never two. My friend asked her where this rule came from and the girl said, “Nowhere. It’s just something you learn.”

Look through e-mails and texts you’ve sent for examples of “precise nuances” you’ve conveyed through punctuation. What “rules,” like the exclamation-point rule cited above, do you think govern the use of punctuation in forms of communication like texts and I.M.’s?

How might an older generation less fluent in these methods get the unwritten rules wrong? (Teachers: sites like When Parents Text might be useful here, but please consider whether they are appropriate for your students first.)

Here are some punctuation marks to consider:

Use Mr. Yagoda’s post to examine and appreciate the role of the exclamation point in a sentence, then track exclamation points you see in “the wild”— in texts, e-mail, advertising, literature, or anywhere else. How do audience and purpose help determine when and why an exclamation point might be necessary or desirable?

Mr. Yagoda’s post also alludes to the use of the period in the Obama “Forward.” Slogan and what it suggests. What, exactly, does that period tell readers? What about the period the band Fun. has in its name?

When I was a teenager, newly fixated on becoming a writer, I came across a piece of advice from Kurt Vonnegut that affected me like an ice cube down the back of my shirt. “Do not use semicolons,” he said. “They are transvestite hermaphrodites representing absolutely nothing. All they do is show you’ve been to college.”

While Vonnegut’s admonition may be harsh, Mr. Dolnick offers a good primer to using semicolons sparingly and eloquently, helping them understand the comma-period hybrid as writers and readers, which is useful, as one never knows where one might pop up.

Use the Draft post “Fanfare for the Comma Man” as a jumping off point to examine comma use in a book you are currently reading. Copy sentences which include commas and use them to deduce the rules for proper comma use.

Then, turn to this post to check the accuracy of the comma rules you’ve come up with and check that your writers are following the rules.

Yes, Times writers and editors do make mistakes and the in-house feature “After Deadline,” which the public can view, too, takes them to task by highlighting and correcting errors in grammar, usage and style that appear in print.

Use this blog to understand grammatical points, like subject verb agreement. Then, become a better editor of your own work by taking the After Deadline Quiz.

Learn from your mistakes and failures, a topic Augusten Burroughs tackles in
“How to Write How-To”:

… to pass along the knowledge of how to succeed, first you must know how to fail. A great deal, if possible. This is essential because it’s far more common (and easier) to make mistakes than to enjoy success. Being aware of potential points of derailment helps to better and more accurately navigate your readers past your own missteps so they can succeed where perhaps you first failed quite miserably.

Value mistakes, and the successes that grow from them, by keeping a portfolio of your work, including revisions and editing exercises. You might even reflect in writing on how your writing has progressed, or create a timeline of your development as a writer to see, laid out chronologically, how you’ve grown from as a writer over time.