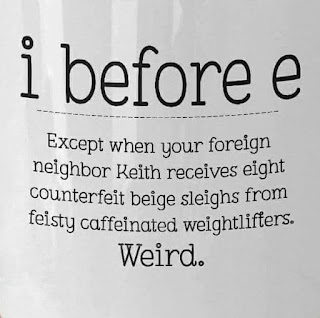 The familiar grade school mnemonic is a “supreme, and for many people solitary, spelling rule,” linguist Edward Carney wrote in “A survey of English spelling.” Its primacy has been acknowledged in English grammar textbooks from 1866 (James Stuart Laurie's “Manual of English Spelling,") until the present day (Bryan Garner's “Modern English Usage").

But like many, many other rules in the English language, it turns out this one is built on a foundation of lies.

A University of Warwick statistician named Nathan Cunningham recently decided to put the i-before-e rule to the test. So he plugged a list of 350,000 English words into a statistical program to see if the math checked out.

The first order of business is to check the ratio of “ie” to “ei” spellings — does i usually come before e? The good news is that it does — in roughly three quarters of all words with either an “ie” or an “ei” pair, the proper spelling is “ie,” as the rule would have you believe.

Think of words like “relief,” “grief,” “niece” or “believe.” The thief was up to a piece of brief mischief in the field, according to the chief.

“So far, the rule is serving its purpose,” Cunningham writes. “If you’re struggling to order an ‘ei’/‘ie’ pair in a word, there’s an approximately three to one chance that the ‘i’ will go first.”

All good so far! Unfortunately, it's all downhill from here.

On to the second part — “except after c.” Cunningham selected all words in his data set with either a "cei” or “cie” spelling. If the rule were as accurate as we'd been lead to believe, you'd expect the “cei” spellings to greatly outnumber the “cie” ones, right? 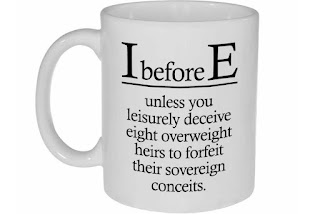 In fact, the opposite is true: “cie” words outnumber “cei” ones by about three to one. The ratio of “ie” to “ei” is exactly the same for the after-c words as it is for all words in general.

"This addendum to the rule completely useless,” Cunningham writes. “You still have roughly three to one odds that the ‘i’ goes first.”

As it turns out, for every “ceiling” there's a “concierge,” a “conscience” and some “celibacies.” For every “deceit,” there are “deficiencies,” “delicacies” and a “dicier.” The iciest glaciers make idiocies out of the conceit of “except after c.”

Cunningham is far from the first to question the i-before-e orthodoxy. Back in 1932, an article in the Elementary School Journal noted the many exceptions to the rule and concluded that “if it were not for the fact that the jingle of the rule makes it easy to remember (although not necessarily easy to apply), the writer would recommend that the rule be reduced to 'I usually comes before e,' or that it be discarded entirely.”

But over the decades, defenders of the rule have attempted to salvage it by proposing various amendments. “I before e, except after c when the sound is 'ee,'" as one formulation would have it. Or, “I before e except after c, or when sounding like A, as in neighbor or weigh.”

But these formulations, too, have their exceptions. “Species” or “financier” for the former, for example, or “being” or “counterfeit” for the latter.

Merriam-Webster once facetiously tried to account for all exceptions with the following jingle:

I before e, except after c
Or when sounded as 'a' as in 'neighbor' and 'weigh'
Unless the 'c' is part of a 'sh' sound as in 'glacier'
Or it appears in comparatives and superlatives like 'fancier'
And also except when the vowels are sounded as 'e' as in 'seize'
Or 'i' as in 'height'
Or also in '-ing' inflections ending in '-e' as in 'cueing'
Or in compound words as in 'albeit'
Or occasionally in technical words with strong etymological links to their parent languages as in 'cuneiform'
Or in other numerous and random exceptions such as 'science', 'forfeit', and 'weird'.

But good luck teaching that to a third-grader.

Or, as an enterprising Redditor recently put it:

I before E...except in a zeitgeist of feisty counterfeit heifer protein freight heists reining in weird deified beige beings and their veiny and eidetic atheist foreign schlockmeister neighbors, either aweigh with feigned absenteeism, seized by heightened heirloom forfeitures (albeit deigned under a kaleidoscope ceiling weighted by seismic geisha keister sleighs) or leisurely reimbursing sovereign receipt or surveillance of eight veiled and neighing Rottweilers, herein referred to as their caffeinated sheik's Weimaraner poltergeist wieners from the Pleiades.

Beyond that, Wikipedia helpfully points out that there are a handful of words (albeit obscure ones) that break both the “i before e” and “except after c” formulations at once, including cheiromancies, cleidomancies, eigenfrequencies and oneiromancies.

For kicks, Cunningham went ahead and ran the “except after” analysis on every other letter too, to see if there were a more accurate exception statement. And it turns out, there is: the letter W.

With words like weird, weight and Rottweiler, it appears that “i before e, except after w” is a more accurate rule than the one we all know.

In the end, there is only one truly infallible rule in the English language: